Joined a 100km ride today. Settled for a 70km cycle instead. My first 70km cycle ever. I was surprised that I could withstand sitting on my bike for 4hrs. Had pit stops twice. Once at JP and another one at Bandarkuceria. Met @zainihp at Bandarkuceria. I hit my breaking point at 67km. My thighs were burning and my knees couldn't pedal anymore. Thank God I just had to pedal for another 3km. M so craving Joe's mean green juice right now. #70km #70kmride #suuntoambit3sport #cycle

I was contemplating whether to join the 100km cycle organized by Ministry of Health considering the longest distance that I’ve had ridden was 50km just 3 weeks ago.

What I know about my body so far was:

So I made up my mind to join the 100km ride on Tuesday but to be honest I was just prepared to go for 70km.

Bobby did share with me that we can always head back to stadium if I couldn’t cope with the ride.

So we woke up way way early on that Sunday morning. Arrived at stadium a few minutes after 6am.

Took a video while briefing before we started the cycle this morning.

After briefing was done then we all started the ride.

We weren’t even went as far as 5km and both of us were left behind by the group. We were going up hill and I admit riding up hills is one of my weaknesses.

We went passed by Supa Save Mabohai and headed straight to Bandarku Ceria then to JP.

It was after 1hr and 45mins then we stopped by JP and looked for open stalls. Fortunately, there was one that opened early. We ordered small breakfast. By this time my body felt tired from the ride. We rested for a while until I felt ready to ride again.

On our way to JP, we saw the group left JP and according to the 100km route, they were heading straight to Muara roundabout.

Before we continued our ride, Bobby was asking me if I wanted to go to Muara following the 100km route.

For a split second I was considering it. But my common sense convinced me to just cut short the ride. I told Bobby I wanted to go back and he said ok and then he shared with me the safest route to go to Bandarku Ceria for another pit stop then back to Stadium.

So from JP we passed by Rimba then Tungku then we went up to Old Airport and to the roundabout.

By the time we reached to the roundabout, it was a few minutes to 10am and a policeman reminded us to ride on the side of the road.

We continued our cycle until we reached Bandarku Ceria. We stopped and bought a drink and also my favourite spicy chicken! 😍 Would you believe me if I said my Sunday wouldn’t be complete without those spicy chicken? 😂 Oh yeah… I am so addicted! 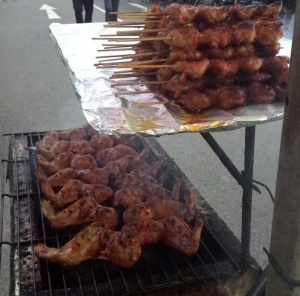 Owh we also met Hj Zaini, a cyclist and also Bobby’s swimming student, while we were resting at Bandarku Ceria.

After I was recovered, I told Bobby that I wanted to go through the hill after Supa Save Mabohai. Bobby was surprised that I suggested that and he said ok.

Bobby took a video of me while I was riding the hill next to Supa Save Mabohai. My speed dropped to 7km/hr. My weakness. Bobby recommends for me to do more training on riding up hills. #hillriding #cycling

So we passed by Yayasan, Kianggeh, STIPRI, Supa Save Mabohai, MOF, Pusat Dakwah and turned left on the roundabout headed straight to Stadium.

By the time we arrived at Stadium, I checked my watch and it was 65km. I checked in with my body and I was feeling fine.

Bobby was behind me and I told him to make it 70km. So Bobby led the way, he said he knew a 5km route to make our ride 70km. Bobby also set the pace because he knew that I tend to push myself.

At 65km I was fine but at 67km my thighs started to burn and my knees were in pain. I felt I didn’t want to pedal anymore. But I had to continue otherwise I wouldn’t hit my target goal of 70km.

I rode the hill next to MOF one more time before headed back to Stadium.

My recovery time from the ride was 120 hours. Apparently my watch Suunto says I should rest for 5 days.

There were so many times I felt tired while cycling. Most of the time from going up hill. Sometimes I felt pain on both knees. I also felt hungry on my way to JP.

However, I was so surprised that I was able to withstand sitting on my bike for 4hrs. I remember a time when I couldn’t even last 10 mins on my bike. 😂

I am so proud of myself for my first 70km ride. I definitely look forward to cycle for 100km. And of course I am gonna start to do more​ training, cycling up hills from now onwards.

This site uses Akismet to reduce spam. Learn how your comment data is processed.

Hearing news about anyone committed suicide is never easy for me.
I am grateful and I feel blessed for receiving insights and wisdom that I can share.
If you have been following my Instagram stories a few years ago then you probably noticed that I posted tarot readings quite often.
I found out this morning that a new initiate and I will be introduced to the AI's mailing list.
I get that it is a trying time not only for the few but for many of us.
I just finished making two energy-infused clearing audios.
I am officially in The Ascending Initiates' directory.
I meditated in my sacred heart again this morning.

I help people with